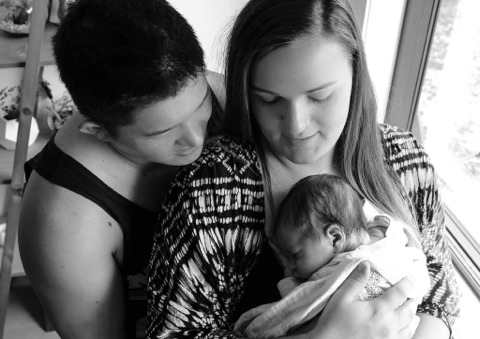 I could not have been more excited to be a mother and to birth my first baby. So when it came time to decide on how we wanted our birth to go, all we knew was that we wanted it to be natural, at home and in the water. My partner, Glenn and I wanted to make baby’s arrival as calm as possible, deciding HypnoBirthing was the way to go and after a lot of research we also decided on a water, lotus birth too.

Surges started off my day early at 6:00am on Saturday morning. They were very on and off in the beginning, getting closer together and further apart again. After releasing my plug throughout the morning I called my midwife to give her a heads up and I said to Glenn, “today could be the day!” and he started getting the pool ready just in case. We carried on with our Saturday getting chores done and gathering up the final bits and pieces we would need for the birth. Around 2:30pm the surges started to increase in pressure, so I snuggled up on the couch and began to record them, practicing my surge breathing as they came and went. At around 3:00pm my belly hardened and then I felt this big “POP!” deep in my pelvis, which could only mean one thing… my waters had released! I raced to the toilet from the knees down and yelled out to Glenn, “you’re going to be a Daddy today, my waters just broke!”

Full of excitement that we were finally going to meet and find out the sex of our little peanut, we called our midwife, Kathy who was unfortunately unavailable, but our back up midwife, Creaghan was on her way with her student midwife, Sarah. This change in plans normally would have sent me into a state of panic, being disappointed that things didn’t go the way I had planned them but HypnoBirthing taught me to relax and to go with the flow.

After enjoying a hot shower blasting on my lower back, I went back downstairs to greet our birth photographer, Tania who had just arrived. Feeling things progressing quickly I leaned over the kitchen bench breathing with the intensifying waves while Glenn started light touch massage on my back. After emptying my stomach into a bucket at around 5:30pm I felt like I needed to get into the pool. Creaghan suggested she check my progress first and at 7cm dilated we agreed that it was a good time to get into the water.

Entering the pool I positioned myself on my knees, hugging the side of the pool for support. The water was a huge relief on my body, which was working so hard to bring us our baby. My lower back and pelvis area started to feel more intense pressure and I began to deeply hum out every breath with each surge.  The birth waves were manageable but the few times I became unfocused I got a little teary and felt overwhelmed. Reminding myself about our little person we were going to meet so soon really helped me relax and focus inwards, breathing through each surge again. Glenn had also begun to pour hot water down my back during each wave, which felt like it halved the amount of pressure I was feeling. Deep in a state of relaxation I couldn’t hear the voices of my birth team around me and I didn’t even realise my second midwife, Lydia had arrived.

Time was hard to track, what felt like 10 minutes was really an hour, and at around 7:00pm my body started to feel little urges to push as baby’s head sank lower into the pelvis. By half past my surges had slowed and my midwives suggested eating some pineapple and taking some homeopathic “birth aid” spray to help speed things along. I mentally began chanting, “Open and unfold” and encouraged baby down and out. My body started involuntary pushing and at 7:55pm my midwife asked if I’d like to reach down and feel my baby’s head as it first began to crown, two minutes later the head was born. I started to get so excited and really had to focus my breathing.

I welcomed on all my surges knowing they were helping bring baby down. I got into a more comfortable position and rolled over onto my bottom with hands out stretched ready to catch our little person, with Glenn supporting me from behind. After hearing my midwife say “baby is rotating around” I knew we were in the correct position and I fully let go through the next surge, releasing baby’s shoulders, then out shot our little person so fast that I didn’t get a change to grab him. My midwife placed our new, tiny baby on my chest and I burst into tears while Glenn beamed down at his new son. Roman had finally joined us earth side at 7:59pm on Saturday the 16th of September 2017, weighing 7lb 1.8oz, measuring 51cm long.

After hearing a friend, Katie’s lotus experience and reading more about lotus births, the whole process sounded so beautiful and resonated strongly with me. The thought of cutting his cord and taking away his placenta didn’t feel right, so a lotus birth was something we had to do for our little man. Respecting him by keeping the spiritual and physical connection between Roman and his Whenua (placenta) in tact until he is ready to release it, grounds him, and gives him the best possible start to life,

Forty-five minutes after birth, Roman’s beautiful Whenua was birthed into the pool with us and placed into a sieve to drain. It was then checked over, patted dry and wrapped in a nappy over night. The next morning we took a print of his side of the Whenua which looks like an amazing Tree of Life! We then we cleaned, dried, salted and covered it with dried rosemary, flowers, and lavender oil and placed in a flax basket. This process we did everyday until the cord detached on it’s own four days later, early Wednesday morning. Roman had spent just over 9 months being nourished and grown by his Whenua, so I felt a little emotional and shed a tear when he had finally released it.

We will bury Romans Whenua at home and plant a pear tree above it. We chose a pear tree as it’s resembles the shape of the uterus and it’s also one of my favourite fruits.

Although everything didn’t go the way I had “planned” it in my head, I couldn’t have asked for a better birth and a more incredible, supportive birth team. I am truly grateful for my amazing partner and the empowering women that surround me in my life and I look forward to learning and growing more with our little Roman.