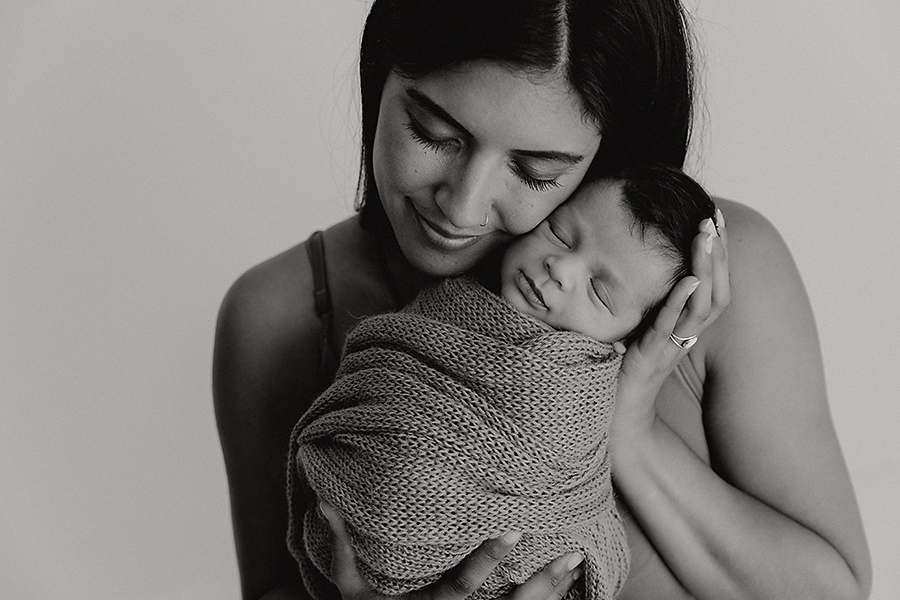 “I began reading Hypnobirthing by Marie Mongan in my early weeks of pregnancy after hearing a
friend’s positive birth story. I felt inspired that I too could have drug-free, calm and easy labour and
that’s exactly what I had.
Our son Mateo was due on the 7th of January 2019, however I had a gut feeling that I would go
into labour before 2019 rolled around. On the morning of December 27th I began feeling some
tightening sensations that were coming every few minutes, I carried on with my day, caught up with
a friend for coffee and went out on the boat ride with the family. I think part of me was also in denial
that pregnancy was coming to an end because I wanted to squeeze a camping trip in the next day.

The evening rolled around and at 8pm that night the tightening sensations were getting stronger
and closer. At the time I was eating fish and chips – not the best choice of meal for someone
knowing that labour was beginning. My partner Dan was quick to get the positive affirmations track
going, I had been listening to this for weeks leading up to the birth to feel empowered and
confident about the labour. As soon as the track ended I needed it back on straight away, it acted
as a pain relief for me and kept me in the zone. The stodgy fish and chips thankfully came up,
which made me feel a lot better, I had read that vomiting was your body cleansing itself in
preparation so this got me a bit excited too that I wasn’t experiencing false labour signs.
Unfortunately I didn’t make it to the toilet but threw up in the sink. As I was cowered over the couch
working through the surges poor Dan was pulling pipes apart to unblock the sink I had clogged up,
his hands covered in spew!

During surges, my breathing kept me so calm and relaxed and therefore the ‘pain’ was very
bearable. I would fall asleep between surges and wake to work through the next one. We had
conveniently picked up the Tens machine too that day so I had that attached to me. Dan kept
urging me to call my midwife to let her know what was happening but I kept wanting to hold off
because ‘it was late’ and ‘she might be sleeping’. I finally gave in and let her know that I was in
labour. I worked through the surges for about 5 hours at home until they were 3 minutes apart,
before heading to the birthing centre in Warkworth at 330am.

The car ride was the part I had worried about most towards the end of my pregnancy, but pillows in
the back seat with the affirmations track continuing made it so comfortable and I continued to fall
asleep between surges. Walking into the birthing centre was so nice – calm, quiet, softly lit and
cosy… no disruption to the zone I had been in at home. When checked, I was 5cms dilated and
pretty happy about that! The affirmations track continued on repeat, the surges did become more
intense but it was like each one was gearing me up to handle the next that had more power. There
was no point that I thought I needed pain relief (which was only offered as gas where I was) or a
feeling of ‘I can’t do this’, I must have skipped the transition phase of feeling helpless and defeated.
My eyes were closed for most of the time and few words were spoken to Dan but orders of what I
needed, water, I’m hot, I’m cold.

Things I found helpful were:
– being reminded to keep my jaw relaxed, loose jaw = loose pelvis
– applying the ‘deeply relax technique’ of placing a hand on my shoulder as an anchor
– visualisation of my cervix opening like a rose bud
– imagining my baby travelling down, Mum and baby working together to birth
– Dan repeating the word ‘melting’ to remind me to let my body relax and just surrender

Around 7am I was fully dilated, I entered the birthing pool, the sun was coming up and I remember
thinking how true the time distortion was that I had heard about! It felt sooo good to be in the warm
water!
My body then began to ‘bear down’ and what a sensation that was. It was intense but definitely not
uncomfortable, if anything it felt good to be naturally pushing! I was becoming quite vocal now and
used my voice to put energy into bearing down. I noticed Dan getting emotional and I asked him
what was wrong.. he thought I was in pain and I reassured him that there wasn’t pain just pressure
and releasing my voice was helpful. ‘J breathing’ here was very helpful.

Dan switched from the affirmations track to a playlist we had made for baby’s birth day, playing one
song in particular that I had listened to often while imagining holding our baby for the first time. I
knew that meeting my baby was very close and the excitement and emotion of that was just
overwhelming, Dan and I were smiling, crying and laughing, the head was out. I turned to my
midwife and said that I would do this again for sure. A few pushes and out baby came, I managed
to catch him myself which was what I had wanted. A few minutes passed of absolute joy holding
him until we checked whether we had had a girl or boy!

Today is day 17 of being a Mum and I’m still buzzing over my labour experience (it also helps that
we set up a little camera to film the birth, I haven’t been able to watch it yet without crying). It was
important for me to capture those first moments with baby and I instinctively knew it would be an
awesome birth that I wanted to share with my girlfriends, who like so many women, have a
preconceived idea that childbirth is dramatic and scary.
What a great beginning to motherhood, thank you Helen so much for guiding me to have such a
wonderful experience!